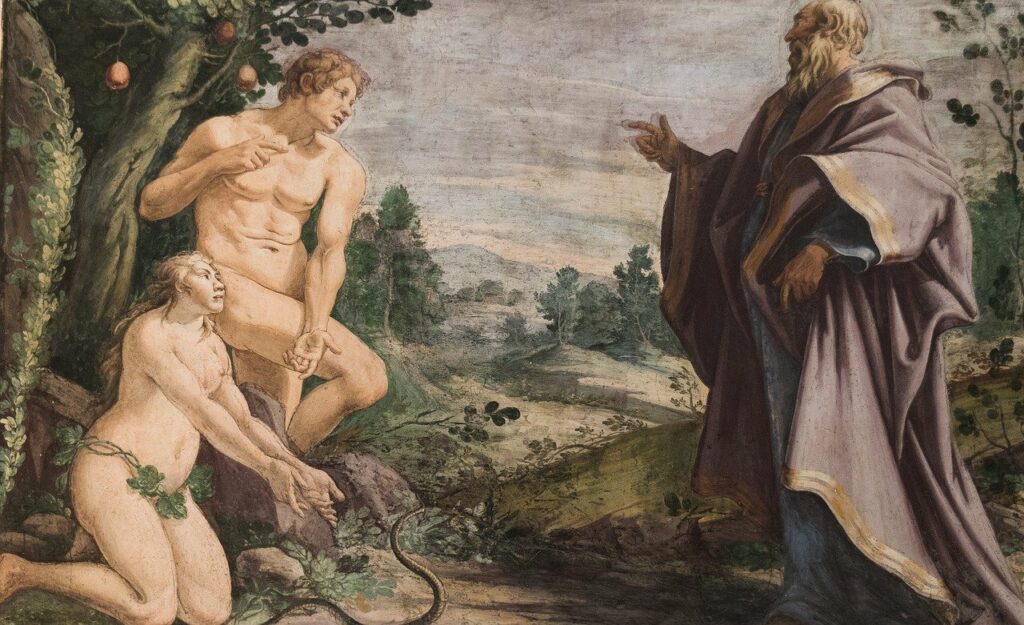 The woman saw that the tree’s fruit was good to eat and pleasing to look at. She also saw that it would make a person wise. So she took some of the fruit and ate it. She also gave some to her husband, who was with her. And he ate it. Then both of them knew things they had never known before. They realized they were naked. So they sewed together fig leaves and made clothes for themselves. [Genesis 3: 6-7]

The popular interpretation of “Original Sin” as written in the book of Genesis in the Christian and Jewish scriptures is this: man disobeyed God, God discovered man’s disobedience, God removed man from paradise and tossed him into a world of turmoil, pain, toil and darkness. This flawed interpretation has been taught for centuries in churches and temples and is still endorsed as truth today.

This belief is the moment of no return for human beings. God, Himself/Herself, claims to have the capacity to forgive “seventy times seven” and if the only transgression the humans made was disobedience, God would surely forgive and it would be done with. It is belief, however, that God is powerless to operate against because belief has no real existence. It is man’s belief that he is separated from God that creates the illusion of real separation. It was man’s belief in his separate life that also caused him to believe he was tossed out of paradise.

The belief that we are, somehow, beings separated from our source is the very cause of darkness in the world but where could we have gotten anything we can call “our own”? The belief that we can be removed from the presence of God, our source, is a belief based in ignorance and superstition. You can no more be removed from the presence of God than you can be removed from the Life you are. For God is that very Life. Earlier, the book of Genesis illustrates this by saying God “breathed Life into man.” According to Genesis, man’s very life is the breath of God! How can you be separated from your breath? You cannot. Your Life is God breath, God’s Life!

This interpretation is actually the Gospel as taught by Jesus. It is Jesus’s message as written in the Christian Bible. Still, it was scandalous 2,000 years ago and it is just as scandalous today but the truth of it is the very truth Jesus spoke of that will set you free.

The realization of this truth is beyond any religion, philosophy or denominations. It doesn’t really matter what name you give to God or whether you even use the name “God” for this source. The ground of your being is beyond names, beyond words, beyond thoughts. How can you ever be separated from Life? How could there ever be anything that exists apart from Life? Nothing could be and nothing ever is. As Jesus taught in his story of the Prodigal Son, belief in a separation from your source can be dispelled simply by returning home. No practice, sacrifice or payment is required. No permission, blessing or credential is necessary.

Your birthright awaits the return to your source. This is the entire Gospel.