The Journey Is An Illusion 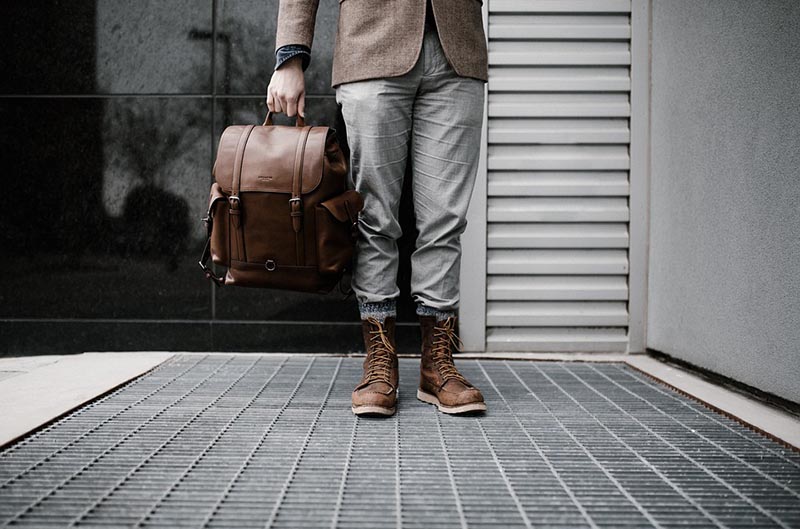 The biggest deception in spirituality is “the journey.” Practically everyone participates in it to some extent or another. I’ve found myself many times over the course of my life talking about my own spiritual journey. How I got from where I was to where I am. And while it certainly seems that way, it’s nothing but an illusion. A big lie.

In the Christian scriptures, a rich man comes to Jesus and asks what he can do to follow him. Jesus tells him he should give all of his possessions to the poor, causing the man to walk away. He wasn’t able to give away the most important thing in his life in order to find God. To many of us who have a spiritual practice, it is our so-called spiritual journey itself that we would not be able to give up. I could reveal right here and now that the spiritual journey is a complete waste of time, and there would be so many who would simply walk away. The journey is too important to them to let it go.

Consider that it is “the spiritual journey” that financially sustains the entire religious and spiritual industry. If people realized there is no need for a journey, billions in revenue would be lost all over the world. Teachers, preachers, authors and gurus would be out of their jobs. Entire sections of bookstores would be completely wiped out. Religious television programs, enlightenment seminars and tent revivals would have no audiences. If the truth of this was accepted, all seeking would go away instantly.

Far be it from me to attempt to shut down a lucrative industry and put so many people out of work. But I think we’re okay here because I doubt many would believe it anyway. For the majority of my own spiritual life, I didn’t get it either. And even if I did, I’m not sure how much of a difference it would have made. I loved my spiritual journey. I believed it was a very large part of who I was.

The supposed spiritual journey is nothing more than an illusion. It’s you discovering what you already are, what you already have. That illusionary appearance of something happening or that you are gaining something is similar to the illusion one sees when opening curtains to produce more sunlight. The full of the sunlight already exists but is revealed when the obstruction of the curtains are removed. For us, The fullness of Spirit/God is already present and when the obstruction of ignorance/unawareness is removed, it is only then that we can see it. Nothing is really happening but to our mind it seems to be.

I’m not necessarily advocating a complete abandonment of a spiritual practice. The structure of our society continually works to lull us back into unconsciousness so sometimes it takes something which seems like a “practice” or “journey” to keep us constantly aware. It is important to remember though that whatever we think or feel is happening, we are not going anywhere or gaining anything. We have the fullness of spirit where we are at all times. We cannot lose it. We can never be without it. It is that constant remembrance that is the true spiritual practice.

There Are No Choices. There Is Only Doing. 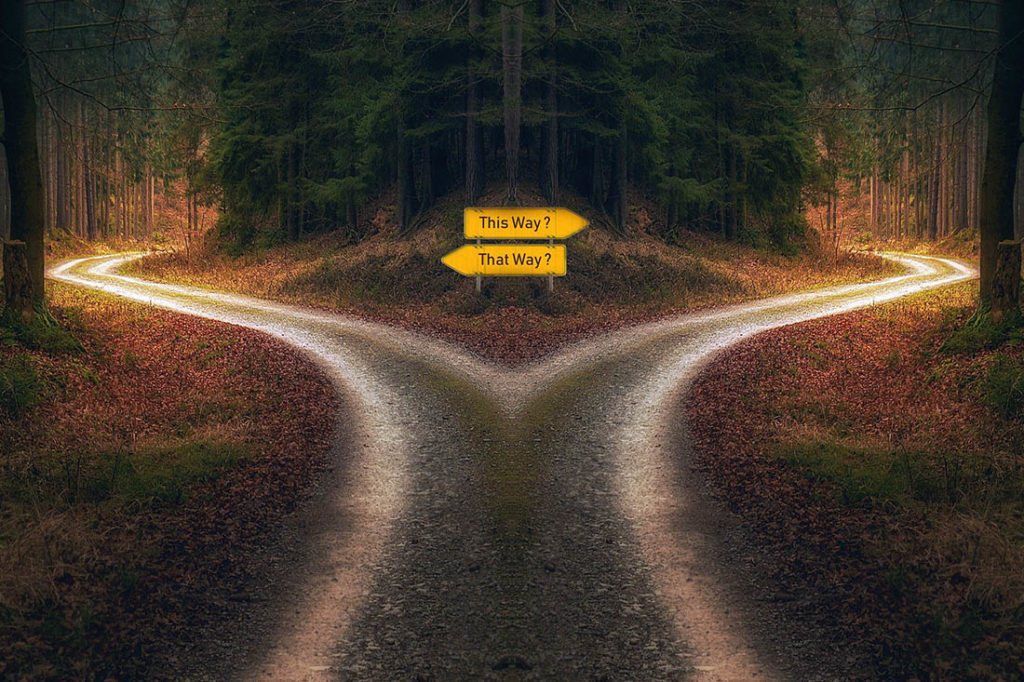 Image by PixxlTeufel from Pixabay

The duality of the mind imagines that there are choices to be made between two or more options. Since the mind likes to believe it is always the one in control, it will tell us we can choose this or that or go here or there. But is this really what is happening in our experience?

We usually think of our lives as if they are a linear-existing, fully-scripted, “Life-Movie,” complete with props, sets, and characters already in place, waiting for us to act out the consequences of every single choice we make. We see life as already having a planned beginning and end and we must make vital choices to maneuver our way through it. However, life is not this way, nor is it like a “choose your own adventure” comic book. Life constantly unfolds in the present moment, it does not follow a predetermined plot. Even when there are the appearances of choices to be made in life, the reality is, there are no choices. There is only doing.

I know, I know, I can hear you now. “What the heck does that even mean? I make choices all day long, every single day!” OK, so let’s imagine a few scenarios. First, think of yourself as an old-time traveler on a horse, riding along a dirt trail. You come to a fork in the road. “Do I choose right or left?” you think to yourself. You imagine one choice may involve a longer, more difficult path to navigate. Perhaps one path involves a potential encounter with thieves. One choice may bring you to a town where you can rest or sell your wares. What’s a traveler to do?

Honestly, you could sit at the fork for days listening to your mind tell you about “this or that” choices. Because of the way the human mind works, you will be convinced that each side of the fork contains its own fully scripted Life-Movie with you as the main character. Depending upon the choice you make, you will either act out this scene or that scene. The choice to make, your mind will tell you, is in which scene will be the best for you to act out?

The reality is, your mind has created an illusion and is trying to convince you to believe this illusion is real. There is no Life-Movie and there are no Life-Movie scenes already set up, waiting for you to enter. There is only life unfolding now. When we begin entertaining ideas such as choice, purpose, and destiny, we assume life is an already constructed map, complete with preferred choices already planned and laid out for us. We think of ourselves as needing to align ourselves with those predestined choices and paths in order for everything in life to go perfectly.

Another scenario. Imagine you must decide if you are going to marry Terry or Alex. You can imagine what life would be like with either of them. Would you have kids? How would the relationship with your in-laws be? Where would you live? What would your financial situation be like? Your mind can (and will) design complete scenarios of life with either partner. It would be tempting to believe either choice comes with its own scripted Life-Movie plot, waiting for you to jump into as a character. But does that Life-Movie exist? It does not. It may appear Alex has more money and life will go a certain way as a result, but Alex could lose it all. Maybe Terry wants several kids as you do, but perhaps you both later discover physical issues prevent that. All of the reasons for making a choice between Terry and Alex are just as illusionary as the actual “choice” of who you will marry. The truth is, you simply marry Alex. That is what you do and, therefore, it is all that is or can be done. There are no alternative paths on a predestined life map to go unfulfilled. You married Alex because that is what happened. The “choice” was only an illusion. Yes, you may divorce Alex and marry Terry, but you can never examine an actual scenario where you marry Terry first because that didn’t happen. Speculation would just be imagination and fantasy. Any idea that it “could” have happened is only based upon the idea of the “Life-Movie.”

Let’s consider one more scenario. You are at a coffee shop and you are asked if you would like coffee or tea. You say “coffee.” Could you have requested “tea”? No, you can only order coffee because that is what you ordered and there is not an alternative existence where you order tea. To order coffee makes it impossible that you “could” have ordered tea because you didn’t. What is real is only what exists, not what you imagine exists. “Could” only exists in the mind. What “is” exists in reality. In this case, coffee is reality and tea is mind. There are no choices. There is only doing. While it may appear we are making a choice between two things, the reality is, we are simply doing a single thing. The appearance of “choosing” is only mind-stuff based upon more imaginary mind-stuff. We may believe we choose coffee because we prefer the taste but perhaps the coffee is spoiled and the mind-stuff would then prove to be a lie. Reality is, we order coffee and that is our only option because it happened. It unfolded in the now with the rest of our life experience, none of which we chose.

As long as we live as human beings, we will be confronted with the illusion we are making choices. It is a part of the human condition and it cannot be avoided. On the spiritual path, we play along with appearances while remaining aware that all of our life is simply doing and it is that doing that unfolds from our highest awareness of what is right. We do not constantly make choices to not steal or not kill. At times it may appear to be so. Perhaps a voice in our head says to take something that does not belong to us or to harm another. But that is never a choice for us. We only do what we know to be right. As our awareness becomes more transparent, our doing incorporates less thought and mind activity, and our doing results in a greater harmony than any choice could have arranged for us, or any mind could understand or have imagined.